Text: Our Journey Around the World, Francis and Harriet Clark, 1895

“Unmistakably the pyramids of picture-book and fancy, of boyhood’s dream and manhood’s anticipation.” Pg 418

The Great Pyramids are the most distinct landmark of the ancient Egyptian times.  They mark a landscape that is filled with buried history, that was undiscovered for hundreds of years, and contains so much more than the eye can see.  We visited the great pyramids as part of our foray into the ancient Egyptian world.  We approached by train, as the tourist industry has capitalized on this rarity quite well.  The pyramids first appear on the horizon in stark geometric contrast to the rolling sandiness that surrounds us.  Nothing else surrounds them, as all evidence of the life is buried below the surface, except for a few modern outcroppings of commercialism and celebrations. The poverty of modern Cairo still pervades even this far out in the country, as seen by beggars on the train and trash in the roads.  Up close even the pyramids themselves have evidence of time and weathering on their rough edges.

The pyramids seem so sharp as we approached them, and we were wary about the day’s coming adventure, as the Arab guide had told us that we could climb to the summit.  Once we saw the scarred and jagged edges, though, we realized climbing would not be as dangerous as we thought.  If many more tourists start to take advantage of the road to the pyramids, it will be impossible to allow climbing on the monuments, so we must take advantage of it while we are here.  With two Arab guides accustomed to the tricky climb, we edged our way back and forth across the face of the Great Pyramid, the rough sandstone flaking off in our hands and clothes as we tried to keep a sturdy grip. As we sat atop the small peak of the pyramid, my mind wandered far back to the age of burial in these larger-than-life tombs.  What treasures were still beneath the surface?  Who had spent so many hours toiling over each individual stone, dedicating their entire life to the rich pharaoh who would only enjoy this place after his death?  The Egyptian society took such a different approach to death and the afterlife than anything we are used to, so I suppose they all had different opinions on the purpose of such grand monsters.  The defaced Sphinx looks over the pyramids like a relaxed mother figure, seated comfortably for thousands of years.  The superstition and spiritual presence of the Egyptians looms all around. 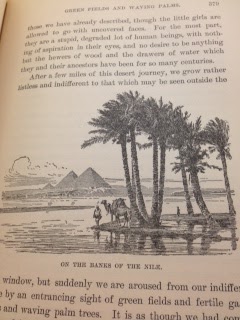 We were also able to explore the carefully preserved remains of those treasures that were found deep in the tombs of the various pyramids and other tombs.  Kept behind protected glass, the gold treasures do not hold the same resonance they would if found clustered under the ground in a pharaoh’s tomb.  But there are coins, and jewelry, and vessels of every kind.  They were buried with food, drinks, clothing, and more, all for the everlasting journey into the afterlife.  Our museum exploration proved very rewarding after the up close and personal experience with the pyramids earlier in the day.

Exhausted by heat and history, we ended the day in a dark, loud Egyptian café in Cairo.  We drank lukewarm coffee and ate spicy vegetables and flaky lamb and enjoyed the local company until the sky began to lighten again over those majestic pyramids.
Posted by Chloe Miller at 5:45 PM

Chloe Miller
I'm a young professional living and working in Manhattan. Adjusting to the working world is sometimes a challenge, so I try to make the very best out of my precious weekends and enjoy everything the city and surrounding areas have to offer. By the time Monday morning rolls around, my goal is to turn the "Sunday Scaries" into "Sunday Sunnies.